Home » Featured » What Size TV Should I Get? Our TV Screen Size Guide Shows You
FeaturedLearn

What size TV should I get?

What size TV do I need for my room?  How big a TV should I buy?

Those are all common questions we are asked often.  I’ve put together this detailed guide to answer exactly these questions for you.

You will no longer have to wonder what TV screen size is best. I’m going to show you everything you need to know to calculate the perfect size TV for every room.

So what size TV do I need?

Whether you’re getting a TV to watch the current movies, the latest sporting events, or as a gaming TV, the short answer is ‘as big as you can afford’.

The long answer is a little more complicated, and depends on the room, whether the display is mounted on a wall or not, the seating distance, the viewing angles, and the resolution of the display. What size TV should I buy?  The size of your television should be limited only by the size of your TV budget – basically speaking. I don’t know how many times I’ve heard it, bigger is better. At least, when it comes to a TV.

Why do you even have a HDTV? You want to feel you are at the championship game. Like you are in the stadium.

You want to lose yourself in the movie or TV show you’re watching. As if you were in the theater.

You want to feel immersed in the virtual world of the video game. Suspend reality, at least for a while, and feel embedded in the game.

You want the wow factor. You want to experience the excitement. You want the emotional engagement. Isn’t that what watching high definition television is all about?

We all want the big HDTV, but you don’t want the television to overwhelm your room. Consequently, you don’t want your TV screen size to appear, under-developed, for the space.

So how do find the perfect TV screen size? In most situations, our experience has proven that you should choose the largest display your room location, viewing angle, viewing distance, and budget will allow.

Many times I’ve heard people wishing their screen was bigger, but rarely have I heard anyone wish it was smaller.

How To Measure TV Size 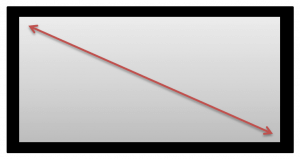 What is the screen size?  The TV screen size is the most important measurement since retailers list new HDTVs by the size of the screen.

To accurately determine the screen size, hold the end of your tape measure in one corner and extend it diagonally across to the opposite corner. Make sure your tape measure is inside the TV screen frame so you’re only measuring the visible screen area.

You have a room where you want to put a new television. What size TV do I need for my room?

The first thing to decide is if you want it hung on the wall or not. You need to know this before you head to the store or shop online to buy your HDTV.

If you are placing the TV on a cabinet, it decreases the viewing distance and can cause some viewing angle issues. Also the size of the flat or curved screen could be limited by the size of the cabinet.

A huge display could look awkward on a small cabinet, and you could be restricted by weight limitations. Conversely, a long cabinet might make a nice size television look small in contrast.

If you plan to use a stand mount, be sure to measure the length and width of the cabinet. Today’s flat screens are much lighter, but it’s still a good idea to know how much weight your cabinet can support.

The average flat screen weighs around 45 lbs., but the weight increases and decreases rapidly based upon display style and screen size. Edge-lit LED’s are the lightest models, with an Ultra HDTV being the heaviest.

A mid-sized LED could weight as low as 25 lbs. On the other end of the spectrum, 60” plasma and Ultra HD displays average around 60-70 lbs. 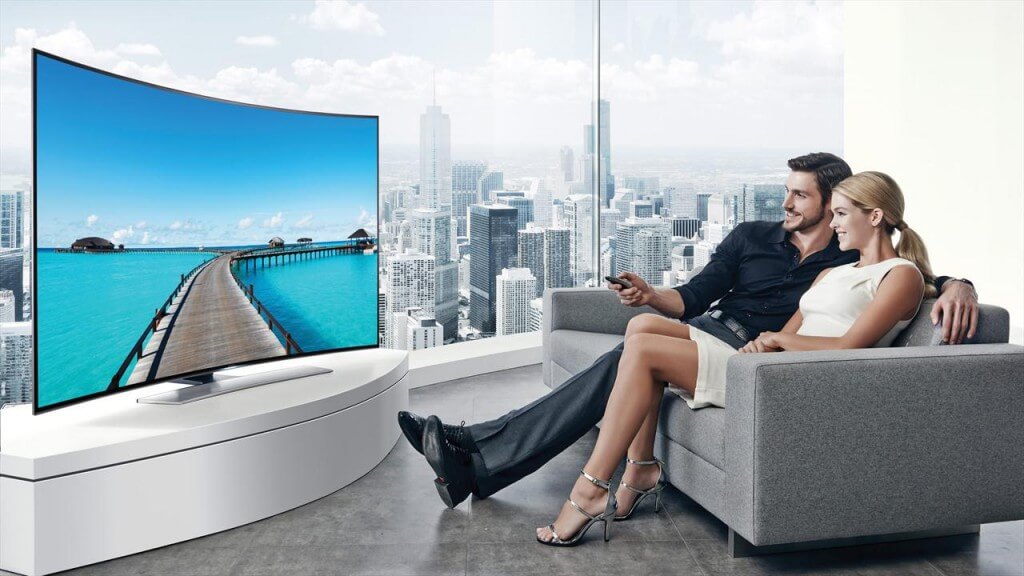 Determining the ideal TV size for room should be based on the distance you are sitting from the TV, the optimal viewing angle of your peripheral vision, and the resolution of the HDTV.

Why is Viewing Distance Important?

The distance you generally sit from the screen, consequently has a huge impact on determining the best size TV for your room. If you want to sit closer the quality of your viewing experience could be diminished by certain types of super sized HDTVs.

The most common resolution offered today is 1080p. For any given screen size, a typical 1080p television has around 2 million tiny pixels. The number of pixels will remain constant despite a change in display size.

The pixels will be smaller and closer together on a smaller screen, therefore resulting in a sharper picture quality. On a large screen, the pixels are bigger and may start to become visible the closer you come to the screen if the program source is not Blue-ray or HD.

How to Calculate the Viewing Distance

A simple formula for determining the maximum size TV based upon how far you sit from the screen is to divide the viewing distance by 1.5. If your viewing area is 8 feet away from the screen, a HDTV in the 60” range will help you achieve the optimal cinematic experience.

The new 4K Ultra HDTVs have 4 times the resolution of 1080p display. You’re in the range of 8 million pixels for any screen size. There is less fear of pixelation as you approach the television since the pixels are a lot smaller and grouped tighter.

A screen size that big overwhelms most people.  Pixelation might not concern you, but you’re also well beyond an optimal viewing angle. What Is Viewing Angle?

This is the angle created from your nose out to the left and right edges of the display. Viewing angle is a simple but crucial concept in selecting the best television size. Ideally, most of your peripheral vision is filled by the screen image.

The movie theaters specification maxim sets 30-36 degrees as the optimal viewing angle. To achieve an “immersive cinematic experience”, most of all you want a screen size that pushes the limits of your field of vision.

THX recommends a display that fills 40 degrees of your field of vision, while SMPTE recommends 30 degrees. To achieve the “immersion effect”, we recommend you push the limit of the biggest screen size based upon your viewing distance.

You’ve done it! You now have the concepts and tools to determined the perfect size TV for your room.

It’s great to understand the key rules, but every situation and room is different. Ultimately, it comes down to personal preference and taste.

If you want to get an idea how well your new TV is going to blend in with your space, Samsung has a great online tool to get an idea of how different size TVs will appear in your room.  Take a picture of the wall area your TV will hang or stand from the desired viewing distance (try to include the entire wall).

First of all, before you get started, measure the height and length of the wall, plus the viewing distance.  You can choose wall or stand mounted.  Then you can select different size Samsung HDTVs to show how each size will appear in your room.

The only thing you have left to decide is what type of HDTV you are going to get. UHD, LED, LCD, 4K, or 3D? Flat Panel or Curved? What brand? Samsung, Panasonic, Sony, or Vizio?

Before you buy a hdtv checklist

Most of all, your TV size decision is ultimately based on personal preference. I always tend to err on the big side because that’s my preference. If the best size for your room is outside your budget, just buy the biggest size TV you can afford.

So what size TV did you buy? Did you buy a TV for watching movies, sports, or playing video games? Please share it with me in the comments below.