Earlier this year at CES, LG revealed Google Assistant running on its 2018 AI enabled Ultra HDTV lineup. When the TVs were first released, the feature had yet to launch.

No additional hardware is required. You operate the cutting-edge AI features directly through the TV’s remote control.

The AI ThinQ TVs responds to hundreds of voice commands through LG?s own smart platform and is more about controlling your TV and connections. ThinQ allows you to switch picture modes, or set the TV to turn off at a specific time or connect an external device such as a soundbar or gaming console.

You can turn off the TV ?when this program is over? without having to schedule a time. Switch to your favorite game console by using voice commands like “connect to game console”. Switch between HDMI inputs, and even change picture modes by speaking ?change to Cinema Mode? into the remote.

Searching for content is even simpler and more convenient with LG 2018 AI TVs. Instantly retrieve information or switch to a channel that offers your favorite content.

?Switch to Discovery channel? instantly connects you to programming about future travel destinations. You can search for channels, and desired films by title, or the name of an actor. Just give commands like “search for the soundtrack of this movie”, or speak an actor’s or character’s name. 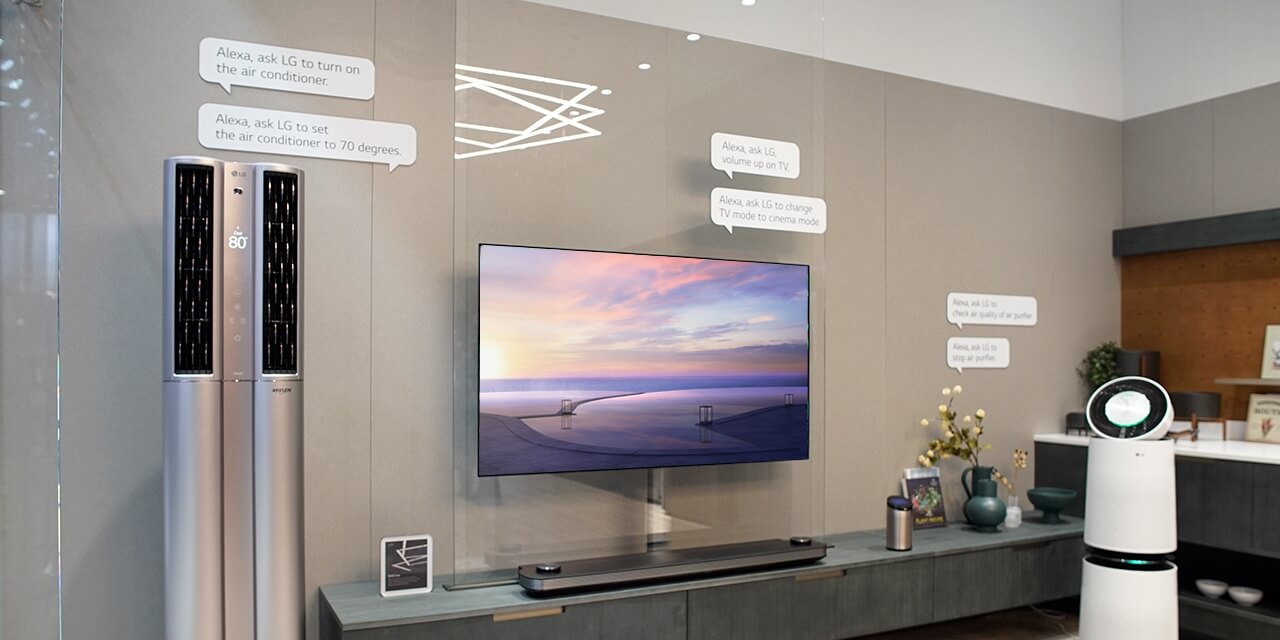 Your HDTV can now answer questions like ?what?s the weather this weekend?? It’s now easy to keep track of one game while watching another.

View your Google Photos, check sports scores, and even search for local businesses without interrupting what you?re watching.

Services such as food delivery and transportation will also be easier with the addition of third-party actions available in the near future.

LG?s 2018 AI TVs also work with existing Google Assistant devices such as Google Home and other smart speakers. LG?s AI TVs can serve as the center of your smart home.

With help from the Google Assistant, you can access devices such as robotic vacuum cleaners, thermostats, air purifiers, smart lighting and many more. The Google Assistant works with more than 5,000 smart devices across hundreds of popular brands making it easier to control smart speakers and other devices connected via Wi-Fi or Bluetooth.

Google Assistant also allows you to send voice commands to your LG AI TV from a separate device like Wi-Fi or Bluetooth enabled smart speakers. Search for programming, Adjust the volume, change channels, and control functions such as play/pause/fast forward, start/stop, and more.

Most of the ThinQ and Google-enabled OLED and Super UHD TVs are now available, with the exception of the high-end LG Signature OLED W8 models.

What do you think of the integration of Google Assistant to LG’s 2018 TV line-up?