We’ve listed the Netflix Recommended TV Badge winners for 2017. Can you name the seven features a new 2017 TV must possess to be named to the list?

How big a part does picture quality play? We explain all below.

?So What is Netflix?

If you are not already familiar with the name, Netflix was the first big streaming service. It remains the best service.

If you have Netflix, you are probably already aware that Netflix offers unlimited streaming of comedy specials, movies, and TV shows.? They are now a big producer of original content including the fourth season of Arrested Development, House of Cards, and Orange is the new Black.

All this for one affordable monthly subscription fee.

You can even create up to five different profiles on a single account. Different family members and friends can watch their favorite content and receive customized recommendations based upon their viewing preferences.

Other streaming service, like Hulu, and Amazon Prime, have yet to give Netflix a run for its money in terms of selection, quality and performance.

Why Does Netflix Have a Recommended TVs Badge?

You can watch Netflix on pretty much any TV.? However, the experience can change dramatically if you’re watching it on a Roku, Apple TV, or your smart TV’s built-in platform.

To make sure you receive the ultimate viewing experience while viewing the streaming service on a TV, a few years ago, they started the “Netflix Recommended” badging program.

What Criteria Does Netflix Use to Judge Recommended TVs?

The company’s rating system for smart TVs is based largely on speed and how well they promote Netflix.

Picture quality is not a part of the Netflix Recommended TV program evaluation process. A Netflix spokesperson explained, “All of the TVs represented already do this really well (image quality), … and it’s ultimately subjective.”

Netflix criteria for a speedy HDTV includes how quickly you can turn it on, how fast the TV can resume playing videos, and how swiftly the TV launches the Netflix app.

To carry the Netflix Recommended TV logo in 2017, a Smart TV must have met at least 5 out of the 7 criteria.

Just like on your smart phone, your TV starts up instantly and apps are ready to use right away.

Your TV is preloaded with the latest version of Netflix.

The Netflix app always launches very quickly. Whether it?s right after turning on the TV or after using several other apps.

The Netflix button on the remote control powers on the TV as well as launches Netflix. With the press of a single button, you can start your TV and get to Netflix.

The Netflix app is easy to access and convenient to launch from the TV menu.

Your TV remembers what you were doing. The TV wakes in the same place it was turned off.

So what TVs made the grade in 2017? Only select models from the brands below have met the criteria and can carry the Netflix Recommended TV logo in 2017. 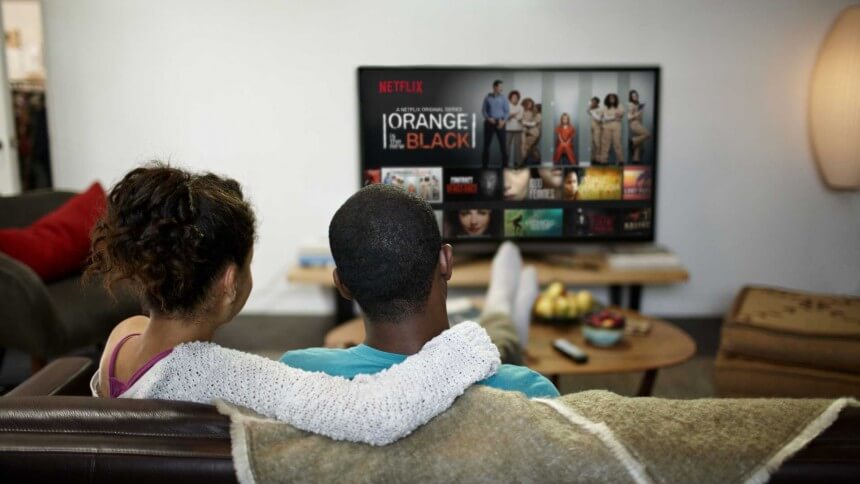 Netflix apparently tested quite a few TVs on this years list before they hit retail stores. Additional models and brands may be added by Netflix as they become available for testing.? We’ve sorted the list by brand.

The Best TV for Netflix – According to Netflix

LG has a large number of TVs the earned the Netflix Recommended TV badge in 2017.